To me, RD Burman’s music has many more dimensions than mere ‘Hits of RD Burman’.

1) First, he was an extremely talented and creative composer with a solid foundation in the orthodox style of composition. When I say orthodox, I do not mean traditional or classical or old style. Orthodox also does not denote an Indian or Western style of composition.

choice of notes and pitch determine the melodic content to some extent. Also, the extent of wavy contours, graceful patterns in the vocals denote varying degrees of melodic content in an orthodox style of composition.

Orthodox style of composition was predominant in the golden era of 50s and 60s. Most composers of the 1950s and 60s composed in the orthodox style with remarkable and consistent success. In fact, most music composers worked to create the vocal melody and struggled to get it right and appealing. Once the composer got the vocal melody right, the task of composing accompanying instrumental preludes and interludes was often left to the assistants. There are endless possibilities in vocal melodies that appeal to connoisseurs as well as to popular taste. Innovations in style, vocals were therefore rare and more of an exception in the golden era.

2) The second dimension of RD Burman’s music is his trendsetting style, innovation and a certain distinctive appeal to youngsters with songs that had a youthful exuberance and lilt. This dimension took him beyond the orthodox style and made his music stand out. Some songs from Teesri Manzil, Hare Rama Hare Krishna, Caravan and Jawani Diwani are of this type. The young generation was simply bowled over.

The orthodox style and the trendy, youthful styles stem primarily from his abundant natural talent, inspired creativity and of course, hard work in translat

ing his talent and creativity into a well presented song. Though RD Burman made his debut in 1961 with Chote Nawab, the late 60s and early 70s saw RD Burman at his best in both these dimensions – he seemed to ascend the stairs to success at a rapid rate. And the songs simply seemed to gush out in full flow; full of creativity, inspiration and abundant talent.

3) The third dimension of RD Burman’s music came in the mid 70s and later. During this period, for some reason, he deliberately adopted a style that involved breaking up the tunes into short bits sometimes with staccato like sounds. Perhaps he wanted to appeal even more to the younger generation. The vocals lost the graceful and wavy contours and became flat, straighter. Some songs from Khel Khel Mein are an example of this style. There could have been quite a few popular songs and some people may like this style, but to me, this style is not appealing. High quality orthodox style songs were few in this dimension. He gradually descended into the ‘average’ zone in the 80s. Even when he tried to compose songs in his earlier orthodox style, they seemed to be laboured efforts and not the free flowing melodies of his earlier years. During this period, there were also many RD Burman songs that are labeled ‘classical’, but were no match in my view, to his songs from the late 60s and early 70s.

In this post, I will highlight many of his songs based on the ‘orthodox’ style, from the late 60s and early 70s. All of them can also be called ‘Hits of RD Burman’, but in my opinion, these songs are the embodiment of the orthodox style of compositions that are a delight to the ear and soul.

In a later post, I will cover his trendy and modern songs.

Enjoy 30 handpicked songs in his orthodox style from a playlist by clicking the link below.

(This link will take you to Gaana.com where you have standard features of Play all, Shuffle and Skip song available. Sometimes, you may have to skip Ads to enjoy the music! Unlike my earlier posts, this player opens in a new window/tab. Since the music player opens in a new window/tab, you can browse through this site or others and enjoy the music playing in the background while you browse!)

Apart from his abundant talent and skill, RD Burman was also versatile. As proof of his versatility, he composed several classical based songs that are a delight for any connoisseur.

While Padosan had several popular and delightfully crazy songs, Sharm aati hai magar is evidence of his strength in classical and light classical songs. Almost all Hindi film songs can be traced to some Indian classical raag or the other. But, in my view, mere identification with a classical raag does not make a song classical. Nor does the presence of the correct set of notes in accordance with a raag. Apart from graceful and wavy contours in the tune, you also need additional stretching and stress on specific notes and ‘gamaks’ in a song to give it a classical touch.

Mere naina saawan bhadon (Mehbooba) was also a beautifully composed classical based song with Kishore touching high notes and emoting strongly in the song. Another light classical based song, Bite naa bitayee raina (Parichay) is also a joy to the ears.

In my view, these classical based songs were sublime and much better than some of his later ‘classical’ compositions. 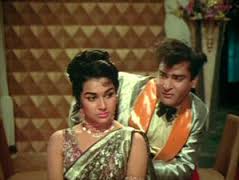 Apart from his sublime classical songs for special situations, there were also a number of normal filmi situations for which RD Burman composed songs that were delightful.

His first major hit Teesri Manzil had two pleasant Rafi solos – Tum ne hamein dekhaa and Deewana mujhsa nahin. These two compositions with emphasis on vocal melody were mellifluous and a delightful complement to his trendsetting songs from the same film.

Aradhana is a landmark film in Hindi film music. It marked the end of Mohd. Rafi as the dominant male singer, and catapulted Kishore Kumar to dizzying heights of dominance in the 70s. There are many theories and stories about this dramatic turn of events. Some say Rafi was away on a tour and hence Kishore was chosen as the playback singer. Other theories claim that RD Burman (who was assisting his father SD Burman in the movie) had a role in pushing Kishore into the forefront. RD Burman and Kishore had a strong bond from the 60s with Kishore singing for him in his second film, Bhoot Bangla. Whatever be the reason for Kishore’s resurgence with Aradhana, RD Burman and Kishore became a formidable combination in the 70s.

After Padosan, Pyar Ka Mausam also provided the base for Kishore’s resurgence with Kishore’s Tum bin jaaoon kahan proving to be more popular than Rafi’s version of the same song.

Kishore and RD Burman scored several hits for Rajesh Khanna including Yeh kya hua (Amar Prem), O mere dil ke chain (Mere Jeevan Saathi) and Ek ajnabee (Ajnabee). R D Burman was at the height of his creative powers in early 70s. Apparently, the tune for O mere dil ke chain was milling around in RD Burman’s head and he could not sleep. He got up and recorded the tune and Majrooh Sultanpuri came up with the lyrics the next day morning!

RD Burman and Kishore also came together for a number of hits for other heroes as well. Rafi was Jeetendra’s voice in a couple of chartbusters in Caravan, but it was Kishore who sang for Jeetendra in Parichay with Musaafir hoon yaaro becoming a big hit. RD Burman and Kishore were a strong combination for almost every hero, including struggling heroes like Navin Nischal who had an evergreen number with Raat kali ek khwab mein (Buddha mil gaya).

During the 50s and 60s, Lata and Asha carried certain images – notably with Lata’s voice being branded as ‘voice with soul’ and Asha’s voice branded as ‘voice with body’. Perhaps this was unfair to Asha who had wonderful songs to her credit in the 50s and 60s and who later went on demonstrate her vocal range and versatility to carve a distinct place for herself. R D Burman was instrumental in giving Asha a number of challenging songs that tested her vocal range.

And Asha crosses over to Lata’s side by singing a devotional song (normally Lata is the first preference for such songs) with her distinct vocal style in Kaahe apno ke (along with Kishore in Raampur ka Lakshman).

Of course, there were several other RD Burman songs where Lata sang like Lata and Asha sang like Asha. Kis liye maine pyaar kiya (The train) and Aaja piya tujhe pyaar doon (Baharon ke sapne) seemed to have been composed with a sweet sounding Lata in mind.

Asha was her usual self in songs like Chori Chori solah singar (Manoranjan) and Bechara dil kya kare (Khushboo). Chori Chori solah is a delightful number where Zeenat Aman’s crooning in the night has some vocal embellishments normally found in light classical songs!

At the other end of his versatile range, R D Burman composed memorable songs with a folksy touch. Chadti Jawani (Caravan) captures the joyful abandon of the gypsies. O Maajhi re (Khushboo) is another lovely folksy tune.

Even the tipsy song situations gave us some evergreen songs based on Orthodox style! Abhi to haath mein jam hai (Seeta aur Geeta) is a superb melody and so is Do ghoonth mujhe bhi (Jheel Ke us paar).

A solid grounding in the Orthodox style of composition was the foundation on which RD Burman showcased his versatility, spanning a wide range from classical to folksy and tipsy songs.

RD Burman was an extremely talented composer whose music is truly evergreen with some songs that are top of the range. There are many music composers of later years who swear by RD Burman and try to follow RD Burman’s style. I wish they would imbibe his orthodox, melodious style and save us from the high pitched, ‘assault on the ears’ numbers that pass for melody in these days. That will perhaps be the best tribute to RD Burman, the talented genius.